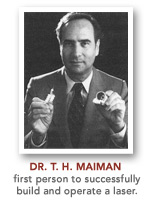 Light amplification by the stimulated emission of radiation was originally described as a theoretical concept by Albert Einstein in 1917, but it was not until 1954 that the first “stimulated” emissions of microwave radiation (MASER) were generated by J.P. Gordon and C.H. Townes at Bell Laboratories. Theoretical calculations for the construction of a visible light “maser” or “laser” were published in 1958. The first laser was built in 1960 by Dr. T. H. Maiman at Hughes Aircraft Company, using a synthetic ruby rod stimulated by high intensity flash lamps, which generated millisecond pulses of coherent 694nm (near-infrared) ruby laser (red) light. Shortly afterwards, 1060nm laser light was generated by stimulating glass rods doped with Neodymium (Nd:Glass laser).

Within a year, pioneers such as Dr. Leon Goldman began research on the interaction of laser light on biologic systems, including early clinical studies on humans. Interest in medical applications was intense, but the difficulty controlling the power output and delivery of laser energy, as well as the relatively poor absorption of these red and infrared wavelengths led to inconsistent and disappointing results in early experiments. The exception was the application of the ruby laser in retinal surgery in the mid-1960s. In 1964, the Argon Ion laser was developed. This continuous wave 488nm (blue-green) gas laser was easy to control, and its high absorption by hemoglobin made it well suited to retinal surgery, soon making clinical systems for treatment of retinal diseases available.

In 1964, the Nd:YAG (Neodymium:Yttrium Aluminum Garnet) laser and CO2 (Carbon Dioxide) laser were developed at Bell Laboratories. The CO2 laser is a continuous wave gas laser, and emits infrared light at 10600nm in an easily manipulated, focused beam that is well absorbed by water. Because soft tissue consists mostly of water, researchers found that a CO2 laser beam could cut tissue like a scalpel, but with minimal blood loss. The surgical uses of this laser were investigated extensively from 1967-1970 by pioneers such as Dr. Thomas Polanyi and Geza Jako, and in the early 1970s, use of the CO2 laser in ENT and gynecologic surgery became well established, though limited to academic and teaching hospitals.

Dye lasers became available in 1969, along with noble gas-halide, or Excimer lasers, in 1975. Since then, many other different laser systems have become available for industrial scientific and telecommunications applications, as well as medical uses.

In the early 1980s, smaller but more powerful lasers became available, and were soon appearing in community hospitals and even physicians’ offices. Most of these systems were CO2 lasers used for cutting and vaporizing, and Argon lasers for opthalmic use. Nd:YAG and KTP laser systems were used by larger hospitals for the new field of laparoscopic surgery. These “second generation” lasers were all continuous wave, or CW systems, which tended to cause non-selective heat injury, and proper use required a long “learning curve” and experienced laser surgeons.

The single most significant advance in the use of medical lasers was the concept of “pulsing” the laser beam, which allowed selective destruction of abnormal or undesired tissue, while leaving surrounding normal tissue undisturbed. The first lasers to fully exploit this principal of “selective thermolysis” were the pulsed dye lasers introduced in the late 1980s for the treatment of port wine stains and strawberry marks in children, followed by the first Q-switched lasers for tattoo removal. Another major advance was the introduction of scanning devices in the early 1990s, enabling precision computerized control of laser beams. Scanned, pulsed lasers revolutionized the practice of plastic and cosmetic surgery by making safe, consistent laser resurfacing possible, as well as increasing public awareness of laser medicine and surgery.

The Future of Lasers 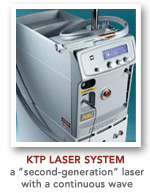 Medical lasers have made it possible to treat conditions previously considered untreatable, or difficult to treat. Patients benefit by improved results and less cost. In the last few years, the main focus of research and development of medical lasers has been on laser hair removal, the treatment of vascular lesions including leg veins, and vision correction. The thrust of current research is directed towards non-ablative laser resurfacing (“laser skin toning”), “no-touch” computerized vision correction, and improved photodynamic therapy for treatment of skin cancer and for hair removal.