Every cell in our body comes from the original stem cells that comprised the embryo we once were.

Everything starts with a sperm and egg, which fertilize each other by merging into a single cell thereby becoming the first stem cell from which our entire body will be created. At that point the merged cell starts dividing into 2 cells, then 4, 8, 16, 32 cells etc (Fig. 1). In these early stages, every one of these cells can become any cell in the human body. These are called “Totipotent” stem cells. 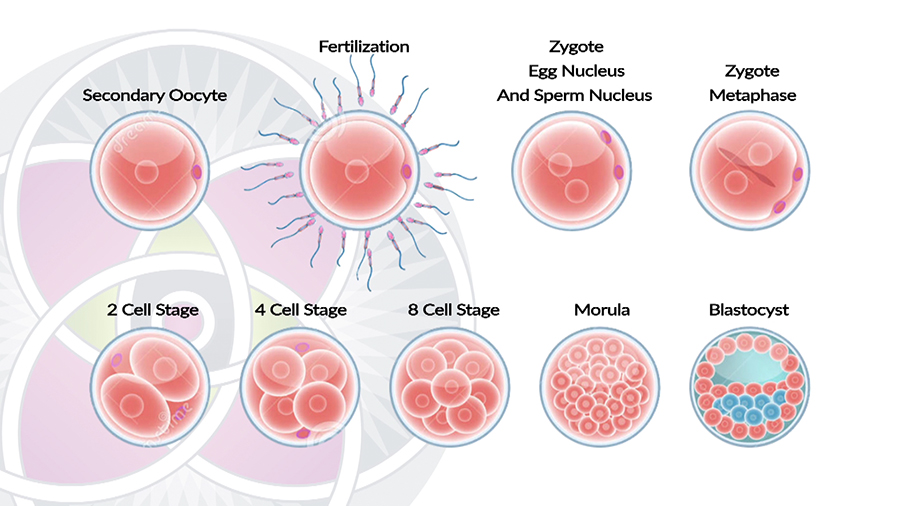 As the original stem cells continue to divide, they start changing, a process called “Cell Differentiation” by following three different developmental pathways or “lineages” (Fig. 2). In fact, in the adult human body there are approximately 200 different types of cells all of which fall under these three major categories: Cells that emanate from the endoderm lineage, mesoderm lineage and the ectoderm lineage. Each of these lineages can be identified in the very young embryo, within just a few days of conception. At this stage all the cells of the embryo are still stem cells, but these cells are limited to developing into the tissues associated with their specific lineage. Thus they are no longer defined as “totipotent” but rather as stem cells with a limited potential of differentiation and are called “pluripotent” stem cells. Eventually as these “pluripotent” stem cells undergo further differentiation, they will lose even more potential of differentiation and become “multipotent”. 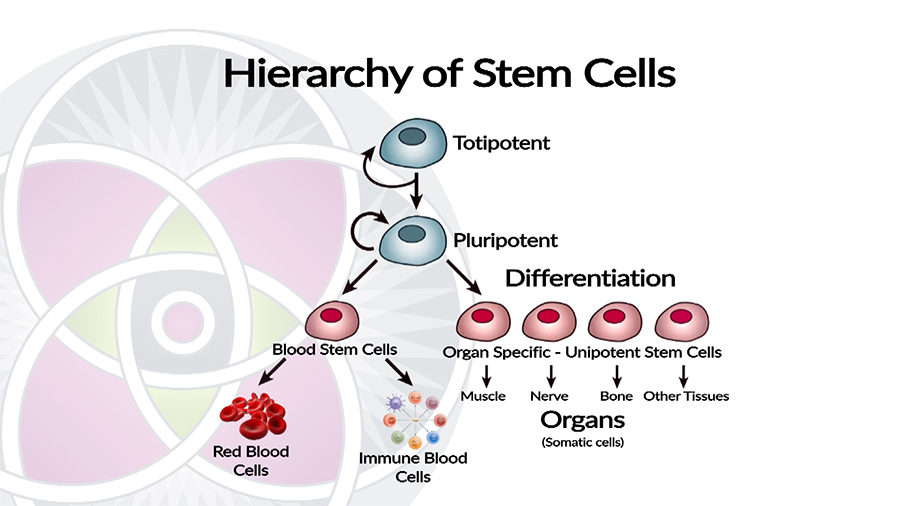 As the embryo continues to develop, its cells choose a path of development down one of those three lineages that lead to specific organs with specific functions. This is called cell “differentiation” that leads to the creation of specific tissues with specific functions, such a nerve tissue, or skin, bone or blood tissue etc. As these early stem cells choose a lineage, they lose their ability to become any tissue, and retain the ability to become just those tissues associated with that specific lineage.

Eventually, every organ and tissue in the adult human will contain a certain percentage of stem cells that are responsible for simply replacing the cells of only that organ that die and need to be replaced.

Stem cells differ from the other adult kinds of cells that make up all the organs and tissues of the body. All stem cells, regardless of their lineage, have two general properties:

Self-renewal: Stem cells are capable of dividing and renewing themselves for long periods. In contrast adult organ cells – also known as Somatic Cells, such muscle cells, blood cells, or nerve cells— have a limited number of times they can replicate themselves. Eventually every adult somatic cell will age and lose its ability to function at peak efficiency. When this happens, it will undergo “programed cell death” or “apoptosis”. At this point the dying cell will be replaced from a new cell generated from a local stem cell.

Conversely, stem cells may replicate themselves essentially throughout a human’s entire lifetime, (proliferate). In a laboratory under the correct nourishing conditions, a handful of stem cells can proliferate and generate millions of identical stem cells in just a few short weeks, and can essentially continue proliferating for years. This is called long-term self-renewal.

It is also evident that embryonic stem cells have a much more robust ability to self-renew, in comparison to adult stem-cells. The fact is, as we age, the amount of stem cells we have dramatically diminishes (Fig. 3). Therefore, our adult stem cells have a limited capacity of long-term self-renewal, and they do eventually die.

(Fig. 3) Percentage of Stem Cells decrease and lose vitality as we age

Scientists are trying to understand two fundamental properties of stem cells that relate to their long-term self-renewal:

The hope is that discovering the answers to these questions may reveal two important things:

One of the fundamental properties of a stem cell is that it does not have tissue-specific structures that allow it to perform specialized physiological functions. For example, a stem cell cannot work with its neighbors to cleanse blood (like a liver cell), and it cannot transport oxygen (O2) like a red blood cell. However, under the right condition, specific physiological signals will stimulate unspecialized stem cells to “differentiate” into specialized cells, including liver, heart muscle cells, blood cells, or any adult organ cells (somatic cells).

The specific factors and conditions that stimulate stem cells to remain unspecialized as well as those factors that stimulate them to undergo Cell-differentiation are of great interest to physicians and scientists. After all, given the fact that human embryonic stem cells give rise to every cell in the adult human, maybe we can learn how to grow entire new and healthy organs in a laboratory as a replacement a diseased organ. 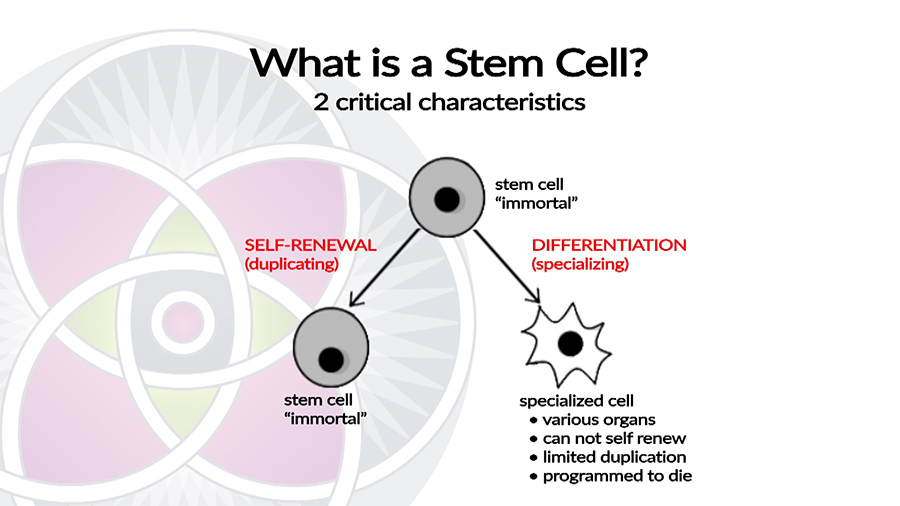 THE PROCESS OF STEM CELL DIFFERENTIATION

Both internal signals and external conditions contribute to the conditions that give rise to cellular differentiation. Of course many of the internal signals are controlled by the genes of each cells, which are encoded in the cell’s DNA. This is called Gene-Expression. The external signals that influence cell differentiation include chemicals secreted by other cells such as growth factors, cytokines and lymphokines, as well as physical contact with neighboring cells. All of these influences are inherent properties of the microenvironment in which cells live.

To the extent that these internal and external influences effect Gene-Expression during stem cell differentiation, has given rise to a new science of Epigenetics. Epigenetics studies how environmental factors, both internal and external control which genes are expressed. Basically, we now know that cells can acquire epigenetic marks that control DNA expression in the cell and that can be passed on through multiple generations of cells. What Are Stem Cells and How Do They Work? In Search of Optimal Health

What is Stem Cell Research? Its Applications and Potential