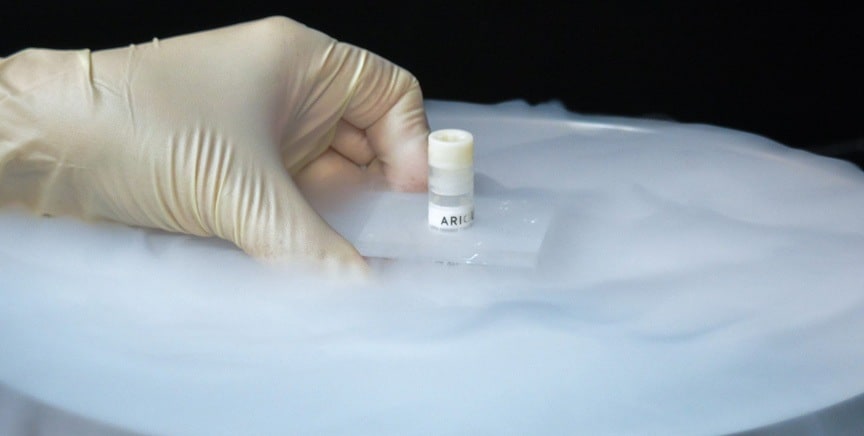 Stem cells are stored in cryogenic freezers at -80°C. In this photo a vial of stem cells is being removed from cryopreservation.

This breakthrough became even more important when laboratory experiments proved that stem cells can be grown in a laboratory, and can potentially be used to develop treatments for different medical conditions.

From that moment on, stem cell research has developed into a fully-fledged area of research, one that has provided humanity with some of the most hopeful answers to questions related to illness.

This new promising field of medicine is called Regenerative Medicine.

Why Stem Cells are Special – Cellular Division and Replacement

To wide ranging degrees all tissues in the human body have the ability to regenerate through a process that involves the creation of new cells by cellular division and replacement. 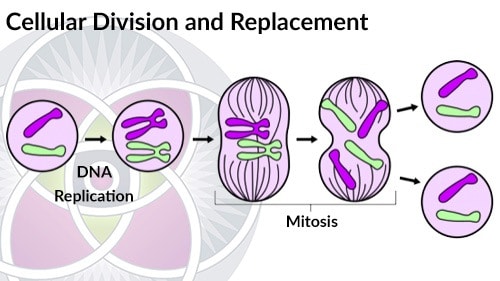 The process of cellular division and replacement. Different cells divide at different rates.

Sufficed it to say, the ability of an organ to replace damaged, diseased or aging cells is key to that organ’s ability to function, and ultimately to humans’ health and longevity.

In addition to the fact that the cells of our various organs can become diseased or damaged in some way, all cells naturally age to the point of losing their ability to function as well as their ability to duplicate themselves through the process of cellular division (cells at this stage are referred to as “senescent”).

In humans, the ability of cells to divide and replace themselves slows down with age and ceases on average around the 50th cell division. (This is called the Hayflick limit)

However, stem cells appear to be able to divide and duplicate themselves for many generations more than the specialized cells that comprise all adult organs and tissues. 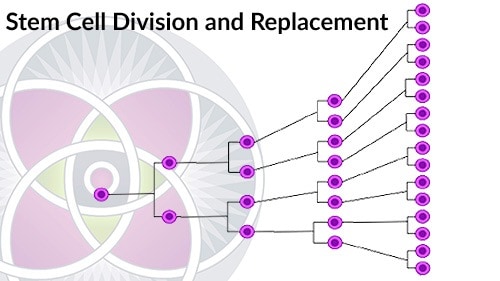 Stem Cells are able to divide and duplicate themselves for many generations more than the specialized cells that comprise all adult organs and tissues.

Additionally, as stem cells also have the ability to transform into the exact same cells as the organ in which they reside, stem cells seem to be an unstoppable manufacturing reservoir that works 24/7 to make sure our body never runs out of the healthy cells and tissues it needs.

This is particularly important in organs where the native cells do not have much capacity to divide and replace themselves on their own.

Consider for example human heart muscle, which when damaged by a heart attack usually die and turn into scar tissue. 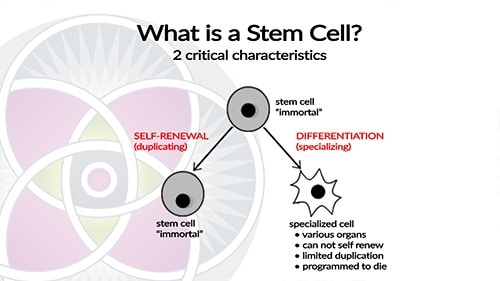 When a stem cell divides, it has the ability to transform into the exact same cells as the organ in which they reside.

Imagine the incredible impact that Regenerative Medicine would have on the world if we could use stem cells to regenerate new healthy heart muscle tissue to replace the muscle cells that were damaged or died due to a heart attack!

Imagine if that same stem cell treatment could also regenerate a damaged or severed spinal cord!

Many hospitals, universities, and research institutions are now focusing on stem cell research. The rationale for this new focus is simple. What if instead of treating damaged or diseased organs or tissues, we could simply replace them with new healthy tissue?!

Imagine the implications… Instead of managing a patient’s disease, we could actually return the patient to a healthy state!

The Goal of Stem Cell Research – Illness as a Temporary Condition

That is exactly the goal of stem cell research: Developing the science of working with stem cells, studying their use, and devising ways to treat different diseases by replacing damaged, aging or dysfunctional tissue with healthy new tissue.

Imagine if there were no more chronic diseases… If all illnesses were a temporary condition!

The Potential to Heal Diabetes

Consider diabetes as an example: In diabetes the specialized cells in the pancreas (Langerhans cells) that create insulin have stopped working. Consequently the patient must inject themselves with insulin on a regular basis. 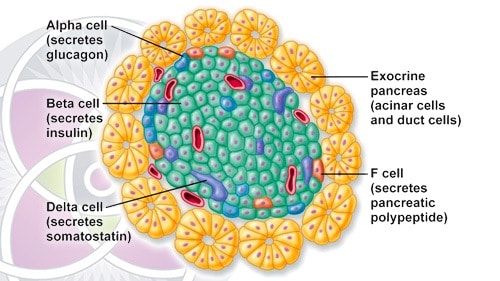 Imagine if we could replace the dysfunctional Langerhans cells with new ones that function properly in diabetic patients.

Imagine on the other hand, if we could simply replace the dysfunctional Langerhans cells with new ones that function properly. For the first time in history, a patient could actually be healed from diabetes, and diabetes would be eliminated!

A Better Understanding of Stem Cells

In order to achieve this, the process in which stem cells are transformed from their undifferentiated state into differentiated cells with specific specialized functions must be better understood.

One of the most important goals of stem cell research is to find a way to control and direct the process in which stem cells are transformed from their undifferentiated state into differentiated cells.

One of the most important goals of stem cell research would be to find a way to control and direct this process. Some laboratory studies have shown that some stem cells can be manipulated to create specific “differentiated” types of cells, but there is still a long way to go to fully understand this process, let alone to reliably control this process.

Two Different Pathways have been Identified

Currently, the Science of Regenerative Medicine has identified two different pathways of working with stem cells.

In fact, there are numerous studies on the NIH website of conditions that were heretofore considered untreatable and hopeless, have been successfully treated with stem cells!

Applications of Research into Stem Cells

According to the NIH and Cancer.org (see linked articles), established stem cell treatments include using stem cells to treat people who have severe burns or people who suffer from blood disorders such as leukemia.

More recent treatments that have been approved in numerous countries outside the U.S., include the use of stem cells to heal damaged and arthritic joints. (Basketball superstar Kobe Bryant had numerous stem cell treatments in Germany)

If in the future, as the science of Regenerative Medicine advances and we learn how to direct and control how stem cells differentiate, then they can use those cells to treat many other diseases.

In addition to using healthy stem cells to treat diseases in afflicted patients, stem cells that contain the genes that carry generational diseases are very useful in the study of the carried disease.

By studying how the stem cells differentiate into mature specialized tissue and eventually manifest the genetic disease, we can develop an intimate and extremely detailed cellular understanding of the progression of the disease.

Furthermore, diseased tissue from adults afflicted with the disease is often difficult and expensive to obtain, and therefore comprises a barrier to extensive research. Damaged cells are typically hard to obtain and study.

The stem cells’ development from an undifferentiated cell into a differentiated one can also be studied. This might help scientists figure out what is it that determines some cells to replicate themselves and others to turn into specific types of cells.

Understanding cell division might help treat diseases such as cancer, since this disease is due to an abnormal division of cells.

For instance, a recent study uncovered part of how stem cells turn into brain cells. Still, the research continues in this field.

Finally, another great application of research into stem cells is to test certain treatments and medications that are not yet safe to test on animals. This is already happening with cancer cell lines which are used to test anti-tumor medication.

The Controversy of Stem Cell Research

As we’ve already mentioned above, what sparked the stem cell research controversy was the use of human embryonic stem cells.

Embryonic stem cells can be found only during the very first week of the development called the blastocyst stage.

The fact is that in order to extract the embryonic stem cells, scientists have to destroy the embryo raising many ethical concerns. Many people consider the embryo a potential human being whose life is sacred and must not be reduced to a commodity, to be bought, sold or traded.

On the other hand, others insist the embryo is the property of the people who donated the sperm and egg, and they have the right to do with their embryonic tissue anything they want.

Fortunately, now that fetal and embryonic stem cells have been proven to be extremely difficult to work with, and clinically dangerous to use, the controversy has essentially dissolved of its own irrelevance.

Furthermore, we now know that placental stem cells which do not interfere with the development of a human fetus, possess tremendous therapeutic potential. 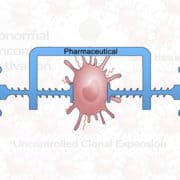 The Science of Stem Cells – Part 3 – What Do They Do 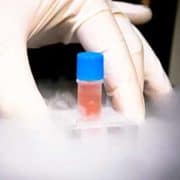 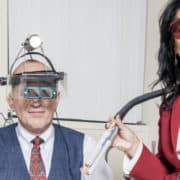 In Search of Optimal Health – Integrative and Regenerative Medicine 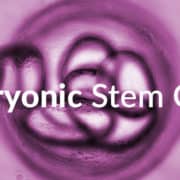 What are Embryonic Stem Cells? The Science of hESCs 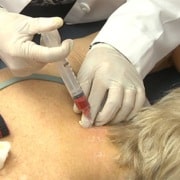 The Science of Stem Cells – Part 4 – How We Use Them 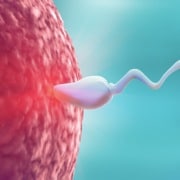 Stem Cells and Their Unique Characteristics